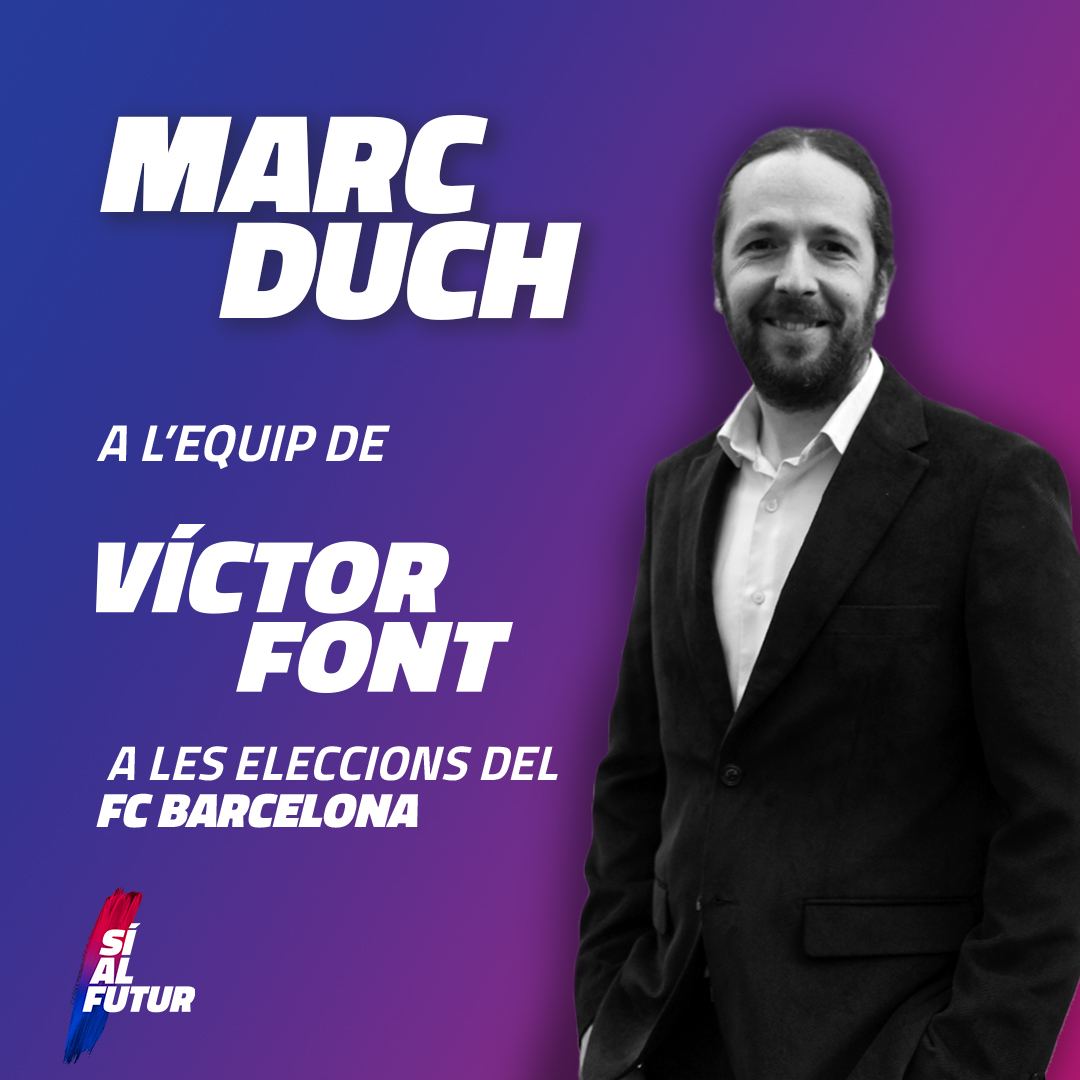 Marc Duch (Barcelona, 1982) – FC Barcelona member number 84,283 – has joined the Sí al Futur (“Yes to the Future” in Catalan) project, led by Víctor Font. A tax consultant by trade, he is the founder and President of the Manifest Blaugrana association, where he has had a high profile in recent years, thanks to his commitment to social activism in relation to the Club, becoming the voice of hundreds of members. He has successfully led social movements presenting the demands of ordinary Culés. If Sí al Futur wins the presidential elections, Marc Duch will, as a Club executive, contribute his experience to Barça’s Social unit.

As a member of the Board of Directors, one of Marc Duch’s main roles will be to provide a link between the Club and the various bodies of opinion that coexist among Barça’s fanbase, with the goal of channelling their proposals, opinions, concerns, contributions, etc. In this area, he will work closely with the Board member responsible for supporters’ clubs and associations.

He will contribute to modernising, democratising and transforming FC Barcelona’s social projects, which are at the core of what the Club is about; he will bring all his knowledge and experience to bear on the various bodies within Barça.

“We are proposing to promote dialogue between the Club and its members, making them central to the organisation. We want to change Barça’s governance model, and make it so that its owners are listened to and take part in the social fabric of the Club. We have put together a plan that goes much further than anything seen before, and I am so excited and honoured to be able to take part and make FC Barcelona into an even greater Club”, explains Marc Duch.

Víctor Font and Marc Duch will present the Sí al Futur social plan at 12:00 on 12 January.

Find out more about Marc Duch

2. Date and place of birth:

Business owner, tax consultant with my own practice, 20 years’ experience in the financial/tax/accounting sector

In 2014, I founded Manifest Blaugrana, of which I am now president. It is an association of FC Barcelona members focused on bringing the Club closer to the members, making information accessible and monitoring the exercise of power within the Club.

Barça plays a major role in my life. I grew up in the Les Corts quarter of Barcelona and my parents live five minutes from the Camp Nou. The pilgrimage from home to the Mini Estadi (home of Barça B) and on to the Camp Nou when the matches were back-to-back, the sand pitches where we had been absolutely thrashed when I used to play for the Sants district team, the visors with Sport newspaper branding on sunny days – I grew up there. What do I remember clearly? Celebrating the 1992 European Cup win with the neighbours on our floor of the building, “breaking into” their place in pyjamas. Or, there was the 1997 Copa del Rey final at the Bernabéu – the first I went to, with my uncle, in a Seat Ibiza that belonged to his mother-in-law, if memory serves. I look back very affectionately on the terrible period under Joan Gaspart (when the Club flirted with relegation), sitting on the terraces with my sister, listening to Força Barça on the radio and laughing so that we wouldn’t cry; we had a great time doing that. Or, more recently, the 2009 Champions League final in Rome, again with my sister – the first and only Champions League final I have watched in the stadium.

I don’t get behind the team much. I like to focus on the game and enjoy it, understand it. Of course, that isn’t possible in tense matches. To be honest, I’m pretty “boring” to go to the game with. I can always see some chance of winning, however remote; I cling onto something or other. I’m one of those who, at 2-0 down, doesn’t leave the ground until the final whistle, in the hope that we will score two in injury time.

I go to the basketball whenever I can, though I don’t understand much of it. I normally go with a friend who really knows his stuff and try to understand it. I love how hot and tightly packed the Palau Blaugrana is.

7. Our slogan means “Yes to the Future”. What do you think is the thing Barça need to improve most urgently in your field?

It is essential to return the Club to the members, to its owners. We need to feel listened to again, to have a dialogue with our Club again, rather than just hearing about it in the media. The Club needs to start thinking again about how to serve the members, and the members about how to serve the Club and make the most of what it can offer: how they can be able to take part in more activities under the umbrella of the Club, and how they can live and breathe Barça 365 days of the year.

8. Do you have a couple of suggestions for those rare times when we are thinking of something other than Barça?

I really like reading – give me any historical novel and I’m hooked. The latest that I have read is La sal de la tierra (The Salt of the Earth) by Daniel Wolf. I also while away hour after hour reading articles on any subject that might interest me (sport, music, politics, philosophy, physics, space science, etc.).

I find it hard to get into series, but those which I do like, I really like. The latest are The Crown and The Mandalorian, but I grew up on The Young Ones, Blackadder, Fawlty Towers, etc. Musically, I’m into any type of hard rock. I always have music on in the background, whatever I’m doing. I even have music on when I’m studying.

Skiing, playing tennis, going for a bike ride in the mountains, a good paella with friends, my motorbike and the open road – the truth is a like lots of things.