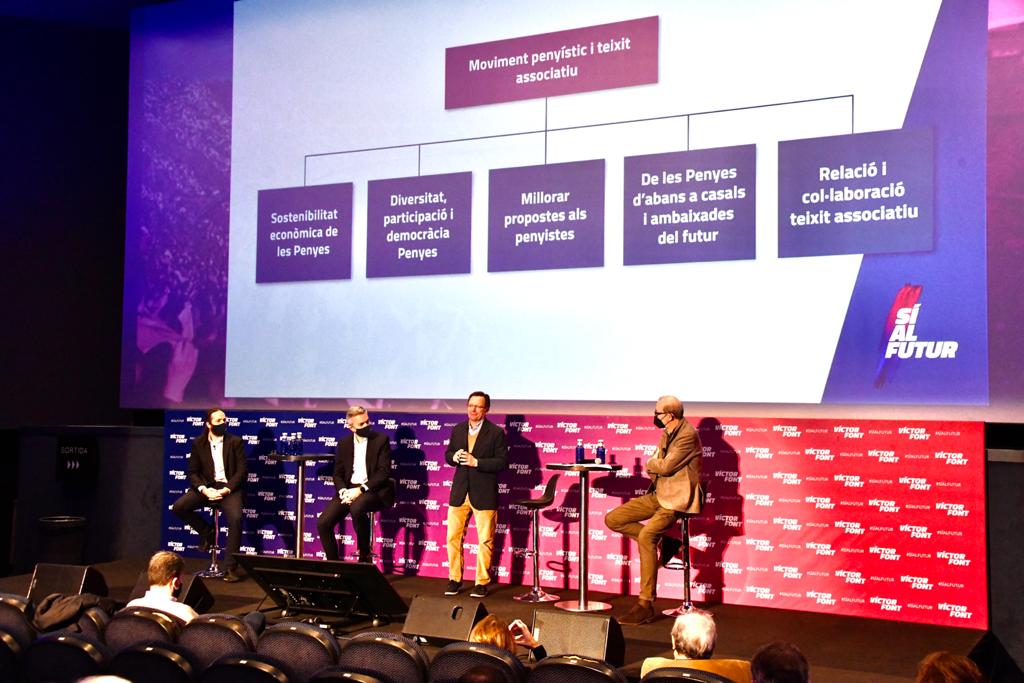 Here you can watch the social presentation

Putting the members at the heart of the Club’s governance model: it is on the basis of that core principle that Sí al Futur (“Yes to the Future” in Catalan) will increase member participation in FC Barcelona, with a view to turning the Club into a more democratic organisation with greater commitment to social issues. To achieve that goal, Sí al Futur will, if it wins the elections, push for the setting-up of electronic voting, create new channels for communicating with members, and promote support for and the modernisation of supporters’ clubs and associations. In line with what he had already explained during the presentation of the financial programme, Víctor Font has reasserted that Sí al Futur represents a guarantee that the members will remain the owners of the Club and will exercise that ownership, which will prevent the Club’s current critical financial position resulting in it being turned into a public limited company. The two people entrusted with leadership of the Social unit will be Marc Duch and Antoni Rovira.

Marc Duch (member 84,283) will, as a Club executive, contribute to modernising, democratising and transforming FC Barcelona’s social projects. He will also provide the link between the Club and the various unofficial supporters groups that coexist among the fanbase. “We are proposing to promote dialogue between the Club and its members, making them central to the organisation. We want to change Barça’s governance model, and make it so that its owners are listened to and take part in the social fabric of the Club”, explains Marc Duch.

Revision of the articles of association

Sí al Futur takes the view that modernising the Club will also involve a comprehensive revision of its articles of association, with the clear goal of adapting them to the social and technological reality of the 21st century, and equipping them with the tools available in the modern day. As such, a very wide range of changes will be made, the following being some particularly important points:

2. Reform of the make-up of the Delegate Members’ Assembly

3. Overhaul of internal mechanisms and bodies to democratise them and make them fully operational

With that in mind, Víctor Font stresses that Sí al Futur “will work towards scrapping the guarantees system (Board members have to guarantee 15% of the Club’s budget from their own funds), and making it easier for Board membership to be based on the experience and capabilities of the people who make it up, rather than exclusively on how deep their pockets are”.

Back to a full Camp Nou

Víctor Font considers it essential to bring back the link between members and the stadium by setting in train effective policies to fill the Camp Nou with members. To that end, Sí al Futur will set up a loyalty programmefor season ticket holders and will offer advantages for those going to matches as a family. It will also, to the greatest extent possible, streamline the allocation of seats to members who do not have a season ticket but are on the waiting list for one. Members without a season ticket will also enjoy priority access to ticket purchases.

The system of benefits for members regarding activities and discounts relating to the Club and its products will be promoted and expanded; the aim is to make it so that proudly wearing Barça gear every day isn’t as big a financial sacrifice as it currently is.

The general policy will shift towards giving the Club a catalogue of attractive services for members, with a view to involving members in the daily life of the Club and really putting them at the heart of it. With that in mind, programmes will be created to enable members without season tickets to access the Camp Nou, the Palau Blaugrana and the Johan Cruyff Stadium under favourable conditions.

If Sí al Futur wins the elections, voting processes and referenda will not be the only ways in which members will be able to participate. “We will hold periodic meetings with members of the Club, of official supporters’ clubs and of supporters groups and listen to their proposals and share information with them”, explains Víctor Font.

In addition, a Working Fund will be created for members, in order to feed Barça with Culé professionals and create a network of professional contacts between members. In view of this, Sí al Futur will bolster the body of volunteers to work on projects run by the Foundation or partner bodies.

Sport will play a central role in the participation of ordinary fans, with the creation of members’ leagues for various sports and age categories, and with the setting-up of a network of gyms run by the Club.

With that in mind, the Sí al Futur programme includes over 50 initiatives, each contributing to one of five overarching goals:

1. the financial sustainability of the supporters’ clubs

2. the fostering of diversity, participation and democracy in the supporters’ clubs

4. a new model: from the supporters’ clubs of before to the centres and embassies of the future

5. relations and cooperation with the country’s associations network

Furthermore, in order to give the supporters’ clubs and associations more of a voice and greater weight, the Board member responsible for this area will attend and fully participate in all Board meetings.

Find out more about Antoni Rovira:

4. My link to Barça:
My father was a Barça member in the 1940s and 1950s. I’ve been going to the Camp Nou on the membership cards of family members since I was little. I am member number 40,705 (since 1990 – Johan Cruyff and his “Dream Team” drew me into the stadium). My seat is along the side of the stadium, second stand back. In my family, all four of us are members: my wife, my two kids and me.

5. What type of Culé are you?
Positive and calm on the outside, can’t bear to watch on the inside. I respect the referees and the opposition, though I never want Real Madrid to win.

7. Do you have a couple of suggestions for those rare times when we are
thinking of something other than Barça?
Three things:
Reading books is the best window you can open for getting to know the world and the human condition.
Doing sport is good medicine for staying healthy and in balance.
Living in nature (sea and mountains) is learning to love it. In my case, one of my passions is to go mushroom-picking in the forest. The other is going out in a boat to contemplate the beauty of the sea and of our landscape,
which we must protect.