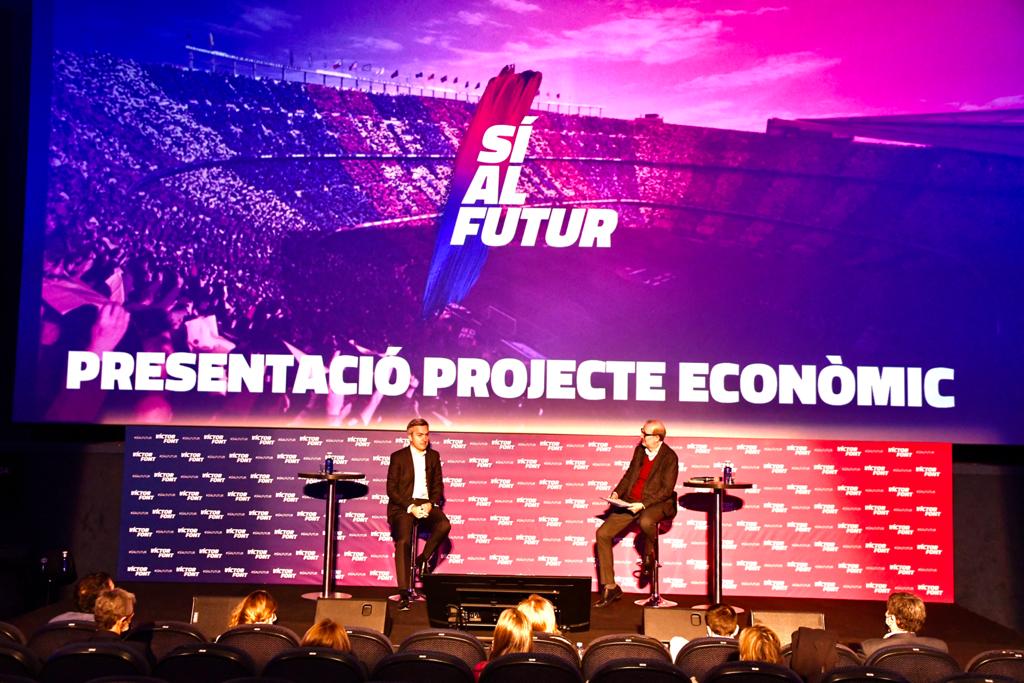 The financial programme of Sí al Futur (“Yes to the Future” in Catalan) is designed to raise sufficient funds to avoid the need for FC Barcelona to be converted into a public limited company (PLC), and to enable the Club to remain fully competitive for European trophies, while applying aspects of the governance programme, such as strengthening the departments responsible for sports other than football and reducing fees for the members who go to the most games at the Camp Nou.

At the presentation of Sí al Futur’s financial programme, at midday today in Barcelona, the precandidate for the Club Presidency, Víctor Font, underscored that “Our plan should, by the end of our term, enable the Club to post a profit of €100 to 200 million, allowing us to strengthen the team and ensure that Barça remains in the hands of the members”.

At the event, Mr Font warned that “Barça’s fragile financial state, combined with the extremely intense competition and the uncertainty caused by the pandemic, is forcing the Club to rethink its financial structure and to equip itself with all the tools required for it to operate as profitably as possible”. As an emergency measure to tackle the Club’s financial crisis, Sí al Futur will, during the first 100 days, implement a plan to balance the profit and loss account for this season and will refinance the debt maturing this summer. At the same time, Mr Font explained, the Club’s finances will be shored up with a plan of “rational management of expenditure and new revenue streams that will enable us to bring in €1.4 billion by the end of the term, post a profit of between €100 and 200 million, and remove the risk that Barça will cease to be owned by its members and become a PLC”.

To increase revenues and profits, Sí al Futur plans to monetise the 400 million Barça supporters around the world; in other words, it proposes to sell new products and services to those fans directly, cutting out the middleman. The precandidacy has worked out three very detailed action plans in this regard: one for audiovisual content, one for merchandising/e-commerce and another for gaming/e-sports, with precontracts in place with key strategic partners in each area. Future Board members have been lined up who are leading lights in these fields, including Luis de Val, José Manuel Villanueva, Iñaki Ecenarro, Oscar Pierre and Manel Sarasa; the precandidacy also has agreements on consultancy work in place with other experts in relevant areas, such as Carlota Pi (bios of all the newly announced contributors can be found at the end of this press release).

With that in mind, Víctor Font stressed that “We will be moving towards Barça being a ‘total Club’ that goes beyond traditional football and becomes a key player in the global entertainment industry. It will be a Club where content production contributes to success on the pitch and vice versa”. Furthermore, implementation of the plan will be in the hands of an executive team of the utmost reliability, selected during the course of work on the precandidacy over the last seven years. It will be led by “a top-notch CEO: a Catalan Culé with experience of technology, telecommunications and managing profit and loss accounts worth millions of dollars”, Mr Font spelled out.

Espai Barça: an urgent matter that must not jeopardise the Club’s competitiveness or ownership model

Víctor Font considers the new Camp Nou and the new Palau Blaugrana “an urgent and unavoidable necessity” and is committed to doing everything possible to bringing them to fruition in the next term. Of course, before taking the final step, Sí al Futur will review the exact current situation of the Espai Barça project – both the architectural plans and the financing agreement with Goldman Sachs – in order to explain it transparently to members and, if necessary, adapt it to the Club’s current needs, opportunities and capacities, before putting it to another referendum. “We will promote a viable Espai Barça that does not jeopardise the members’ ownership of the Club but does enable us to continue competing at the elite level. If either of these two conditions is not backed up by the figures, we will not launch any project that would mortgage our future and endanger the Club as we understand it today”, stressed the precandidate.

All the new Board members being proposed by Víctor Font to run the Club in the first term have now been introduced. The directors announced today are:

Xavier Carbonell (Barcelona, 1970) – member 97,552. An executive director with a great deal of experience in the medical devices industry, specialising in change management, marketing, biotechnology and health, he will bring financial and business knowledge to the Board of Directors.

Iñaki Ecenarro Iturrioz (Errenteria, 1973) – Member 85,968. An entrepreneur and investor in technology companies who founded the standard-setting tech start-up Trovit, he will offer the Board knowledge of the worlds of finance, business and new technologies.

Oscar Pierre Miquel (Barcelona, 1992) – member 58,434. An aerospace engineer, and the founder and CEO of Glovo, he will bring financial and business knowledge to the Board.

Manel Sarasa i Serra (Girona, 1971) – member 81,480. An industrial engineer and serial entrepreneur, and the cofounder and CEO of Wine is Social, he will offer the Board knowledge of the strategy, finance and digital worlds.

Joaquim Uriach Torelló (Barcelona, 1966) – member 9,430. Chair of the Uriach pharmaceutical conglomerate will bring financial and institutional knowledge to the Board.

Luis de Val Mínguez (Barcelona, 1979) – member 41,480. Founder and CEO of YouPlanet, and an expert in the production and distribution of audiovisual and entertainment content, he will bring knowledge of the audiovisual, entertainment and social media fields to the Board.

José Manuel Villanueva Villalba (Barcelona, 1976) – member 36,622. The cofounder of Privalia and 011h, he will offer the Board knowledge of the financial and digital fields.

The Board will also receive consultancy services on financial and innovation matters from Carlota Pi (Barcelona, 1976). She is an engineer and entrepreneur, and founder and director of energy supplier Holaluz, which started the process of being listed on the BME Growth stock exchange in 2019. While she has been in charge, Holaluz has signed agreements with producers of clean energy generated from hydroelectric, solar, biogas and geothermal plants, and has obtained green energy certificates from the Spanish National Energy Commission (CNE).