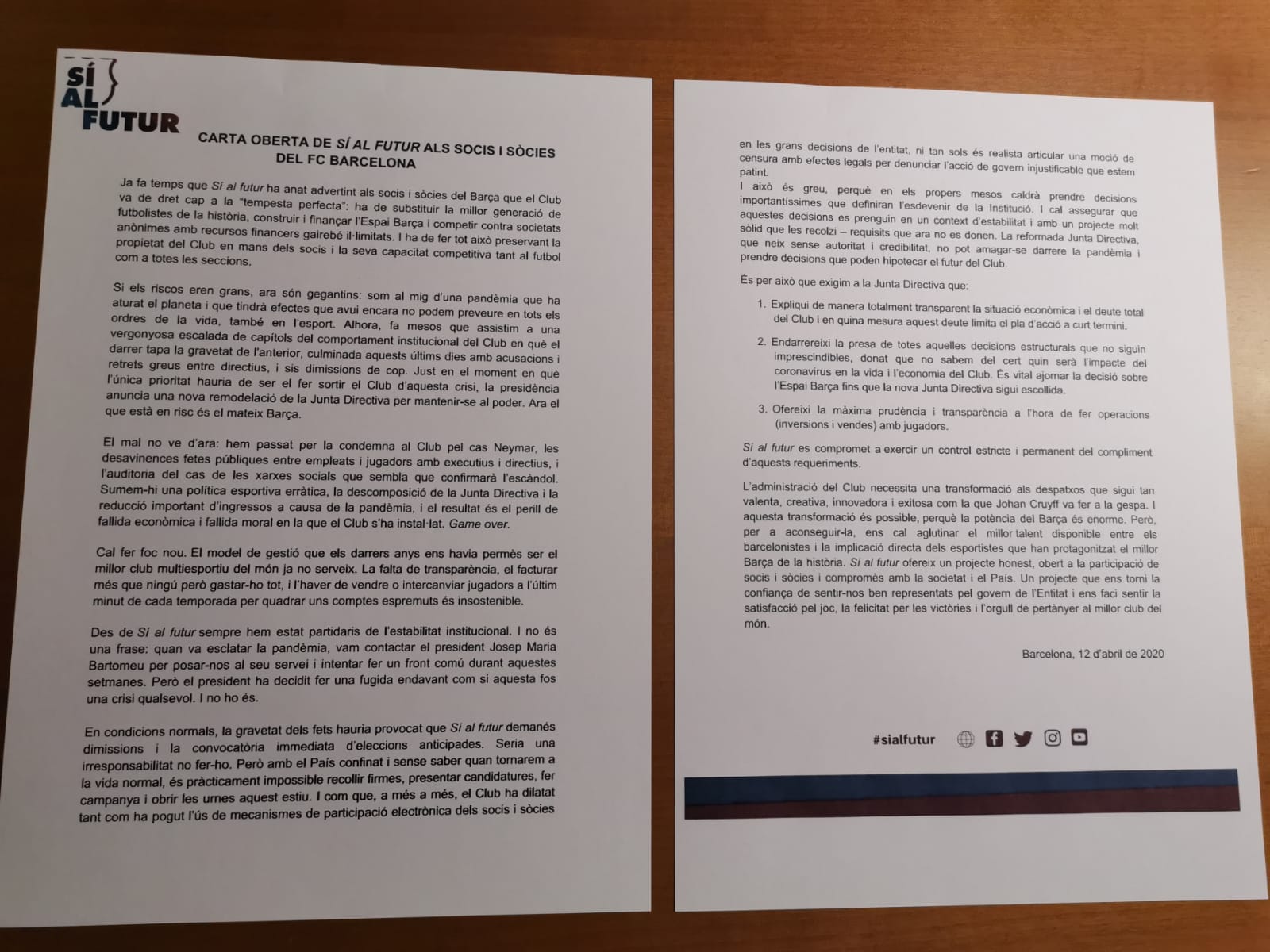 For some time now the project Sí al futur (Yes to the Future, in Catalan) has been warning Barça members that the Club was heading towards the "perfect storm" – it had to replace the best generation of footballers in history, build and finance the Espai Barça development project and compete against corporations with almost unlimited financial resources. And all this had to be done while preserving the ownership of the Club in the hands of the members and its competitive capacity both in football and in all sections.

If the risks were great, they have now become gigantic. We are in the midst of a pandemic that has brought the planet to a halt and will have effects in all walks of life, also in sport, that today we cannot yet foresee. Likewise, for months we have witnessed a shameful escalation of chapters in the Club's institutional behaviour in which the latest event hides the seriousness of the previous one, a process that culminated in recent days with accusations and serious reproaches among board members, and six abrupt resignations. And just as the only priority should be to get the Club out of the crisis, the presidency announces a new remodelling of the Board of Directors in order to stay in power. What is at risk now is Barça as a whole.

This is not a recent problem – we have experienced the sentencing of the Club in the Neymar case, the disagreements made public between employees and players with executives and managers, and the audit of the case on social networks, which seems will confirm the scandal. Let's add an erratic sports policy, the breaking up of the Board of Directors and the significant reduction in income due to the pandemic, and the result is the danger of economic bankruptcy and moral decay in which the Club has settled. Game over.

We need to start from scratch. The management model that in recent years has allowed us to be the best multi-sport club in the world no longer works. The lack of transparency, turning over more than anyone and yet spending it all, and having to sell or exchange players at the last minute of each season to balance exhausted accounts is unsustainable.

At Sí al futur we have always been in favour of institutional stability. And this is not just a phrase. When the pandemic broke out, we contacted president Josep Maria Bartomeu to make ourselves available and try to build a common front during these weeks. But the president chose to rush forward, as if this were just any crisis. And it is not.

Under normal conditions, the gravity of the events would have moved Sí al futur to request resignations and the immediate call for early elections. It would be irresponsible to do otherwise. But with the country confined and not knowing when we will return to normal life, it is practically impossible to collect signatures, present candidates, engage in a campaign and bring out the ballot boxes this summer. And since the Club has prolonged as much as it has been able to the use of the mechanisms of electronic participation of members in the entity's major decisions, it is not even realistic to articulate a vote of no confidence with legal effects to denounce the unjustifiable government action that we are suffering.

And this is serious, because in the coming months we will have to make very important decisions that will define the future of the Institution. And it must be ensured that these decisions are made in a context of stability and with a very solid project to support them - requirements that are not present now. The reformed Board of Directors, which was born devoid of authority and credibility, cannot hide behind the pandemic and make decisions that could mortgage the Club's future.

For all these reasons, we demand that the Board of Directors:

Sí al futur undertakes to exercise strict and permanent control of the compliance of these requirements.

The Club’s management needs a transformation in the offices that is as brave, creative, innovative and successful as the one Johan Cruyff brought about on the pitch. And this transformation is possible, because the power of Barça is enormous. But in order to achieve it we need to gather the best talent available among Barcelona members and the direct involvement of the sportsmen who starred in the best Barça in history. Sí al futur offers a project that is honest, open to the participation of partners and committed to society and our country. A project that gives us back the confidence of knowing we are well represented by the Entity's government and makes us feel satisfaction for the game, happiness for the victories and the pride of belonging to the best club in the world.

And here are some of the media that echoed the interview: